Happy, sad, angry, confused, irritated, nervous, or any other emotion, it can all be expressed without speaking a single word. It is all there in your facial expressions. For an actor it is all performance. But what about an animated character? From Merida rolling her eyes to Abu’s confused look, everything is the work of an animator. We share with you some useful tips for facial animation that can make your animated character both lovable & memorable. 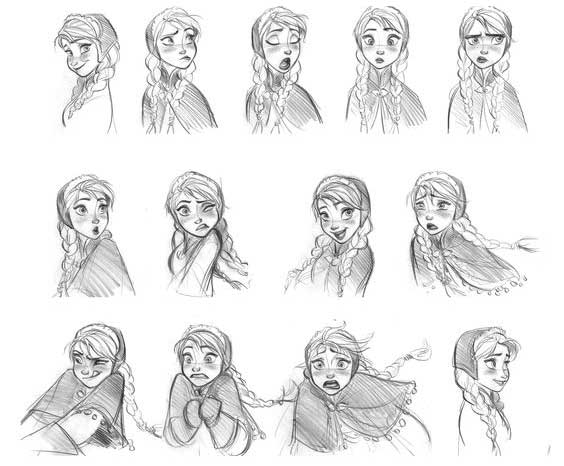 Why does an animated character need facial animation?

The simplest answer is to make an animated character life-like. It has the same role as that for a real actor. Facial expressions reveal the actual thoughts of the character to create the illusion of life in animation. It can mostly be achieved with simple rigs, and is all about the presentation & timing. Although animation allows for exaggeration, the most successful animated performances are the ones that know where to draw the line. Keep it as real as possible, and communicate the thought process of the character.

How does an animated brain work?

Same as a real brain! An animated brain works on the concept of input & output. In fact, it is closer to a computer than the actual human brain. Responses are generated as per the information fed to in a software by an animator to create the impression of the five senses – sight, sound, smell, taste & touch. These inputs are then used as per the events to provide the required facial expressions. A character may react to a physical event like a hit or a tickle; or to an emotional event like seeing a pretty flower or falling in love.

How to select the right facial expressions?

The best way to start is to break down the shot. Ask yourself the following questions – what is happening in the shot? How does the character feel about the events? Does something occur that may change the emotions? Once you have the answers, start with the main emotion of the shot, and then work on the changes, if any. For shots that involve both posture & expression change, treat them separately. Often in such a shot, people may miss the expression. But it will always leave a subconscious impression on the audience. How long to hold a facial expression?

There may be times when the character may need to hold an expression for some time. Remember, Kristoff’s stunned expression when Olaf fantasises about summer? That’s what we’re talking about. The best way to figure this out is to know when the character is reacting to stimuli. These are the moments that will define the length of time & the expression that needs to be held on screen. Another good way of understanding this is to keep in mind that expressions don’t suddenly change. They need some thinking time. Give your characters that thinking time. For example, if the character is walking down the road, feeling low & sad, then raises his head to notice a pretty girl, which cheers him up, there needs to be a beat of time during which the character notices the girl, and processes his feelings. So the facial expression graph will move from sad to neutral/less sad/distracted to amused/happy. If the character moves from one emotion to another without any thinking time, the performance will look mechanical. Such a reaction is only possible in situations when something absolutely unexpected happens to your character, like a speeding car, or for exaggerated character reactions like eyes popping in The Mask.

When in the process should you add dialogues?

Dialogues are an important part of the facial expression. What a character is saying has to reflect on their face as well. A character can’t deliver good news with a sad expression, unless that is how the character is projected from the beginning. It is important to take dialogues into consideration early on in the animation process. After all, the pronunciations of the words have to match the actual mouth movements. Start by blocking the jaw movements, especially where the jaw opens & closes. A useful method is to concentrate on the accent & pronunciations of the voice actors. This will give you a better idea as to the actual movements.

What about the eyes?

Eyes are the trickiest part of the face. But it becomes easy if you remember that only the camera view matters. The eyes should always look focused from the camera view even if that means that the eye target is not positioned where he/she should actually be looking. More often than not, you need to cheat the position of the eyes. But remember basic physics – to focus on far away objects, the iris needs to be as parallel as possible, and to focus on objects much closer, the iris needs to be more cross-eyed. Be careful about eye movements. A lot of frequent eye movements can signify nervousness or excitement. Very rare movements can mean anger or seriousness. Be sure of the character’s emotions & thoughts, and design eye movements.

The facial expressions of your character will go a long way in achieving the desired audience reaction. Make sure you use these tips for facial animation, and create some popular characters. Now, get sketching.

Does budget matter in film making